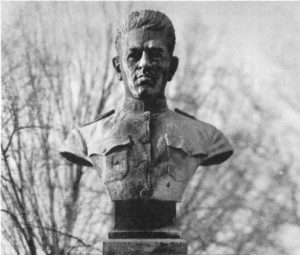 Henry J. Sweeney spent his brief life on Manchester’s West Side. Born and brought up on Douglas Street he was the son of Mr. & Mrs. Jeremiah Sweeney. While attending St. Raphael Church and School he was remembered as a very fun loving and popular young man.

The United States entered World War I in April of 1917 and less than one month later on May 1, 1917, young Sweeney voluntarily enlisted in Company B, the Old Sheridan Guard. He transferred from Concord to Westfield Mass after the old First New Hampshire Infantry had been partially absorbed by the I03rd Regiment, 26th Division.

In July of 1917 Sweeney married the former Mildred Grant and a few weeks later he was deployed to England and then later on he joined the troops already fighting in France. He wrote many letters home to his wife, father, sisters and friends and he was always in good health and spirits and was ready to fight for freedom when his time came.

Unfortunately his time came too soon and on February 18, 1918 at the young age of twenty, Private Henry J. Sweeney became Manchester’s first casualty of World War I.   He was mortally wounded from the effects of a bursting shell which landed right beside him as he was in action at Soisson, France in the Chemin-des-Dames sector.

Sweeney was buried in France, his grave was properly marked so that after the war was ended it was possible for his body to be brought back to Manchester. He was buried with full military honors at the Old St. Joseph Cemetery located on Donald Street.